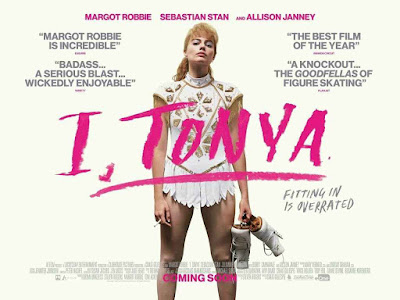 Tonya Harding faced obstacle after obstacle in her pursuit to become the greatest figure skater in the world. Whether it was an overbearing mother, abusive husband or judging panels who dislike her trailer trash upbringing, Tonya refused to let anything stand in her way. Even an opponent's kneecap. She just kept moving towards her goal.
Like someone once said "Some motherfuckers are always trying to ice skate uphill".
While she may not have achieved her dream of becoming an Olympic champion, Harding did achieve notariety and infamy as one of the first "celebrities" born of the 24 hour news channel era, coming just before O.J. Simpson.
Indeed, the Harding/Kerrigan incident is one of the first celebrity news stories this reviewer remembers following during the Nineties and now, 24 years later, director Craig Gillespie aims to tell Tonya Harding's story through the people that lived it. Even if it might not be the "truth, the whole truth and nothing but the truth" but based on "irony-free, wildly contradictory, totally true interviews with Tonya Harding and Jeff Gillooly".
The mockumentary-style of interviews, killer soundtrack and fourth-wall breaking may not bring audiences any closer to knowing whether of not Tonya really did or did not have anything to do with the attack on Kerrigan but will bring close comparisons to Scorsese's Goodfellas. "As far back as I can remember, I always wanted to be a figure skater".
It will also generate sympathy and empathy for Harding thanks to an incredible performance from Margot Robbie. She nails the brashness and bravado of the impetuous skater as perfectly as Tonya could land the famed Triple Axel but also the sadness and vunerability of a woman who lived with abuse from everyone she loved, including her mother who is played with a foul-mouthed frenzy by the scene-stealing Allison Janney.
But it is towards the end of the film, when she is faced with the prospect of losing everything that she has worked so hard to achieve that Robbie delivers a performance as good as Tom Hanks' breakdown at the end of Captain Phillips.
In any other year, the Best Actress Oscar would have Margot's name on it but sadly, right now the only way for Robbie to win now is to hobble McDormand on her way to the podium!