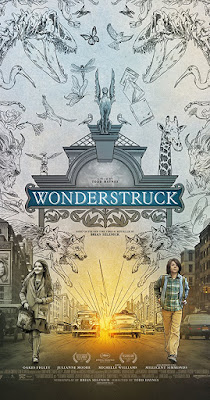 After perfectly recreating the '50s in Carol, Todd Haynes sets his sights on the 1920s and 1970s in his adaptation of Brian Selznick's Wonderstruck.
The film sees two alternating storylines as Ben, a child in 1977, and Rose, a deaf girl in 1927, both runaway from home and head to New York in search of the missing piece of puzzle that will ultimately bring the two plots together.
With the period setting, wonderstruck children in the main roles and a puzzle to solve, it brought to mind comparisons of Martin Scorsese's Hugo. So it was no real surprise to discover that Selznick also wrote the book on which that film was based.
While Hugo's cultural reference point was the birth of cinema, Wonderstruck reveals itself as a love letter to museums. In particular the American Museum of Natural History.
Ben (Oakes Fegley) is grieving following the sudden death of his mother (played in flashbacks by Michelle Williams) and when he discovers a clue to the identity of his father in an old book, he hotfoots it to New York City.
Likewise, in the 1920s, Rose (played by deaf actress Millicent Simmonds who is destined for big things this April between this and A Quiet Place), escapes from her oppressive father in search of a silent movie actress (Julianne Moore) who she spends her days idolising on the big screen.
Haynes and his production team absolutely nail the period detail, in particular the cinematography used in the '70s-set New York scenes is fabulous and looks like it was actually filmed 40 years ago.
While one cannot fault the look of the film, it is unfortunate that the concept of continually and frequently switching between the two stories becomes confusing and a distraction to the point that it takes over an hour for the plots to converge and even then, the eventual link is explained away in a rushed voiceover to try and wrap things up in a neat little bundle.
Clearly designed to invoke a sense of nostalgia for trips to the museum, it is likely to create the desire to spend a more enjoyable Night At The Museum instead.