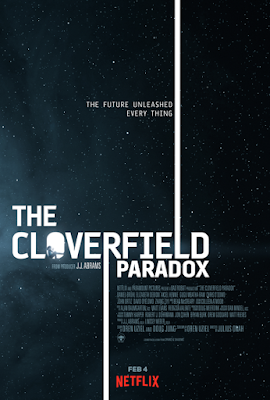 It could be fair to say that the biggest surprise of Superbowl LII wasn't that the Philadelphia Eagles upset the New England Patriots but Netflix calling an audible and screened a trailer announcing that The Cloverfield Paradox would be released immediately after the game!
With that Netflix scored an impossible hail mary touchdown and won the Superbowl trailer war, receiving the most chatter on social media and sacking the big hitters like Jurassic World: Fallen Kingdom, Mission Impossible: Fallout and the Solo teaser. The only thing they couldn't compete with was #SuperbowlSelfieKid!
The Cloverfield franchise has always managed to surprise. The first Cloverfield stunned audiences with a fantastic trailer that suddenly appeared in cinemas with no advance hype. 10 Cloverfield Lane was announced and released within two months and now this latest stunt.
One can only imagine that Overlord, the fourth Cloverfield movie which has already finished filming, will automatically appear on your computer one day, like a U2 album, whether you want it or not.
While one can applaud the audacity of Netflix's marketing masterstroke (releasing a film during the most watched sporting event of the year), it would only really matter if the film was any good.
The answer? Yes and No.
As a genre B-Movie, The Cloverfield Paradox plays out like a Greatest Hits of science fiction cliches. Or Now That's What I Call A Space Station Sci-Fi Film.
A space craft on a mission which is Earth's last hope but ultimately goes array and cannot be solved by Chris O'Dowd turning it off and on again? Check
A racially and ethnically diverse crew? Check!
A noble captain who will sacrifice themselves for the good of the mission? Check
A shifty, European officer who may or not be out to sabotage the mission? Check
On its own, the film is passable, enjoyable Netflix fare which gains bonus points for having the final hero and villain passing the Bechdel Test. At the same time unfortunately suffers in comparison to 2017's Life as the plot and style is very similar.
This could be why Paramount decided to sell it to Netflix, change its name from God Particle and repackage it as a Cloverfield film.
And this is where the film does fail because it feels like the movie has been retrofitted into the Cloververse.
10 Cloverfield Lane had also started life as a standalone script but it worked as the majority of the film was set in the bunker and you didn't know what was really outside (or who the real monster was). The film only laid its cards on the table in the final five minutes.
Paradox similarly has hints and minor allusions to the other films but it is only at the very end that the audience is given a definitive answer (albeit a very brief one).
While it is a fun final image, it feels like the audience have once again been shortchanged.
One starts to feel that anyone can make a cheap genre film and as long as they tack on a shot of a monster in the final reel, you can banner it under the Cloverfield name.
Let's hope this is not the case and the producers can return to the inventiveness and surprise wow factor that worked so well for the original.
It is certainly the stuff a Cloverfield of Dreams is made of.