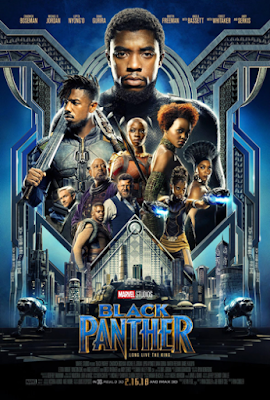 The road to Avengers: Infinity War marches on with the Marvel Studios' 18th film since the Marvel Cinematic Universe began with Iron Man ten years ago in 2008.
With 18 films under their belts, it could be easy for Marvel to rest on their laurels and produce carbon copies of their greatest hits time and time again. Instead they are taking bigger and bigger risks.
After all, this is the company that gave us a movie starring a talking raccoon and a tree monster and a Flash Gordon-esque Thor sequel from the director of What We Do In The Shadows.
There are only two things they are still to achieve:
1) We still don't have a female-led solo movie yet. We have to wait till 2019 and Captain Marvel for that, and is the only thing that DC can claim they have bettered Marvel at.
2) A MCU origin film that doesn't end with two CGI characters beating the crap out of each other.
While Black Panther might not buck the trend in this department, it represents a huge leap forward in other ways and could be one of the most significant cultural events in Hollywood.
Writer-director Ryan Coogler (Fruitvale Station, Creed) brings Chadwick Boseman's T'Challa back to his home country of Wakanda for his coronation as King and take on the mantle of Black Panther following his father's death in Captain America: Civil War.
To tell this story, Coogler has assembled an incredible cast of veterans, rising stars and two "Tolkien" white guys. It is truly an embarrassment of riches that include Oscar winners Forest Whitaker & Lupita N'Yongo, nominees Angela Bassett & Daniel Kayuula and Emmy winner Sterling K. Brown.
It is impossible to overstate how important this moment in cinema could be. To have so many people of colour in the leading roles in a mainstream movie outside of Madea marks a welcome change and not only that, it passes the Bechdel Test with flying colours. The four leading women are all strong, independent queens, warriors, spies and inventors who are not sidelined in a wasted romantic subplot.
All this looks to deliver a bumper box office weekend as the audience, often underserved by Hollywood, come out in force. It's just a shame that the final product doesn't quite live up to the hype, instead coming in around mid-tier Marvel and plays out like a standard superhero origin tale.
The early signs are promising with the first half playing out like a Bond movie with Boseman as the gentlemen spy supplied with Vibranium powered gadgets by his precocious little sister Shuri who is a teenage Q and played with gleeful delight by Letitia Wright. The action jet sets around the globe from a daring robbery in London to a casino shootout and car chase in Busan with Martin Freeman's Everett Ross as Felix Lighter and Ulysses Klaue as the accented, maniacal super villain. Having spent so many years hidden underneath CGI and a motion capture suit, he is clearly relishing the chance to ham it up in front of the camera, and get time for a Hobbit reunion with Bilbo.
The issues come when the action returns to the CG heavy Wakanda and the real plot and villain in the form of Michael B. Jordan's Eric "Killmonger" come to the fore and the film switches from a spy movie to Marvel's version of The Lion King, with a prince battling to regain the throne from an evil relative following the death of his father.
The central struggle between T'Challa and Killmonger comes from an interesting place in that both want to advance the fortunes of Wakanda albeit from different perspectives and methods. One wants the country to do more through outreach and development while the other wants to provide arms to have communities rise up against their oppressors. This is Boseman's stoic MLK vs Jordan's charasmatic Malcolm X.
At the heart of it is a fascinating struggle but the power is somewhat lost as it descends into a standard Marvel third act which includes a mass CG brawl involving war rhinos, a one-on-one fight that could have been cut straight out of Tron Legacy and story beats right of the original Iron Man playbook.
It might follow the superhero formula but this is a standalone film with very few references to the wider MCU so the casual filmgoer can enjoy it for what it is without worrying too much about how it sets things up for Infinity War.
This is a superhero film straight outta Wakanda but this reviewer has a feline that Black Panther will, like the lion, find it's roar in the future.