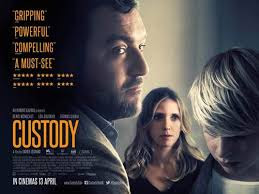 At the moment, given the box office headlines, you might be forgiven for thinking that Avengers Infinity War is the only film out in cinemas at the moment.
However there are a few smaller films out there that are fighting for the audiences' attention and love... similar to the battle at the heart of the Glasgow Film Festival award winner Custody.
Written and directed by Xavier Legrand, this character study of a custody battle between two bitter exes is mainly viewed through the eyes of the youngest son. Who at times, is nothing more than a weapon wielded by one party to inflict pain on the other.
The film begins with with a very mundane, matter of fact arbitration hearing with both parties blaming the other for the breakdown of the marriage. She claims he is violent and he claims she is a liar and manipulative.
Throughout the course of the story, the truth slowly begins to emerge. Even if things are never truly black and white until the final act.
Actor Denis Minochet is superb as the father who is a whirlwind of emotions. Effortlessly moving from rage to heartbreak in a single scene,
He will be familiar to some as the French farmer who is visited by Christoph Waltz's Hans Landa in the opening scene of Inglourious Basterds, which was another masterpiece of tension.
Legrand deliberately plays the long game here to spectacular effect.
Audiences watching Custody will be like the frog that is placed in a pan of water. Rather than dropping us straight into a visceral and direct formulaic thriller and potentially losing us, Legrand instead perfectly executes the slow build. Pulling you further and further in to the family dynamic before it all comes crashing down in spectacular fashion.
It is only when it is too late that we realise that Legrand has slowly been turning up the temperature throughout the film and we find ourselves boiling alive and in a situation that is so tense that your fingers will need surgically removed from the armrests at the end of the film.