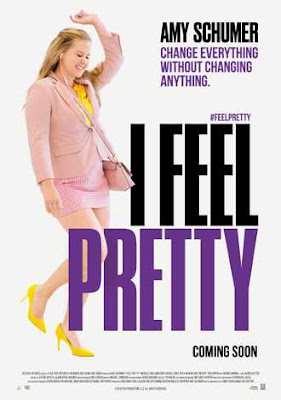 Hmmm, just like the main character Renee (Amy Schumer) and her body, I have very conflicted views on I Feel Pretty and am not entirely sure what I am meant to be looking at.
On one hand it is supposedly an inspiring tale for all women who have insecurities about their bodies and that the self-esteem and confidence to make your dreams come true is within you the whole time.
On the other hand, the woman in the film telling the audience this is someone who is incredibly successful in her own life and only in the fashion world (in which the film is set) could she ever be considered "unattractive".
Yes, women everywhere are constantly bombarded with magazines, adverts, TV programmes and movies showing them how "society" believes we should all look and it sucks. It is a huge issue and one that the film tries to tackle by having Schumer's character join the front of house of a fashion company and it makes some valid points but also some terrible ones. For example, Renee gets the job of the receptionist because she wants to be "seen" but admits it is actually a step down for her in terms of pay.
But the film is not just about changing the fashion company's views towards everyday women. It is about Renee changing her view of herself.
It should get some credit for doing a body swap comedy in which the body is never swapped.
Schumer is Schumer the entire time and at no point is there any Shallow Hal-style fat suits or she suddenly wakes up in the body of Jennifer Lawrence.
If this concept sounds like Big then you would be right and it even features a scene of Renee watching the film and wishing she could be beautiful. Cue an accident during a spin cycle class and a knock on the head which makes her believe she is beautiful.
This is where the issues start to slowly creep in. It is never really established whether Renee is seeing someone else in the mirror or whether she truly believes that her actual body is beautiful.
Obviously everyone else sees the real Renee, albeit one now exuding an overabundance of confidence that makes her (initially) more attractive and appealing to everyone she meets.
The film then follows the body swap movie/Big/13 Going On 30/17 Again template to the letter.
Her big change allows her to gain everything that she ever wanted. Her dream job, success, a boyfriend, etc. etc. but the further she goes down the rabbit hole, the more she starts to believe the hype and alienates those who loved her for who she was such as her friends and new love Ethan (played by the non-typical leading man Rory Scovel).
What is interesting about the film is that looking back on it, Renee is always treated the same way by the men in her life. They are attracted to her beauty and confidence, even when stood against supermodels types as exhibited in the bikini contest sequence. The real body shaming issues actually come from fellow women, particularly those who work within the Lily LeClaire fashion house.
Despite all the talk recently of women should be supporting other women, this movie reinforces the idea that women are in competition with each other for work, men, success, etc.
The only person that sees Renee as a friend and ally is Michelle Williams' Avery LeClaire. She sees her as someone different, not afraid to say what she thinks and the perfect person to help deliver a new make up line aimed at the everyday woman on the street (not that kind of woman!).
Unlike The Devil Wears Prada, Avery is a boss who is honest and likeable in her treatment of Renee and is played with this Betty Boop-esque high-pitched squeak by Williams which is an inspired decision and leads to some of the film's best moments and makes her relatable as she struggles with confidence and not being taken seriously due to her voice.
It will be no surprise to anyone who has ever seen this type of film before that she suddenly loses her "looks" and crashes hard, believing her life is now over that she has lost everything (looks, job, friends, love interest) all through her own undoing.
Despite its best intentions for a last minute course redirect to stay on point on the film's message in the final act once our lead character realises that "it was inside me all along", the delivery falls kind of flat.
The moment that it lost its audience is probably when Schumer chastises Emily Ratajkowski for worrying about her looks and love life when she looks like that and the women in the cinema auditorium are screaming the same thing back at her.
For an example of this, check out this Twitter moment of someone live tweeting Greta Gerwig's reactions to the film while watching it.
So when it comes down to it, I Feel Pretty confident in saying that the end result is one that feels not pretty but pretty confused, not that witty or bright.