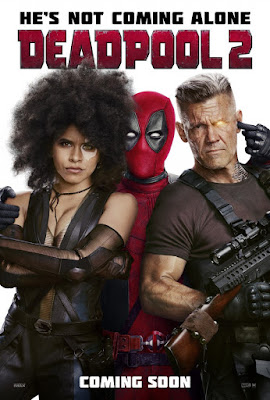 Sorry Ant-Man and the Wasp. Your delayed August release in the U.K. means that you have been pipped to the post of "small scale comic relief superhero movie designed to lift your spirits following the tragic events of Infinity War" by the Unicorn-riding, Frozen singing, Merc with the Motormouth Deadpool 2.

(Woah I know what those of you reading this are thinking. What's that about? Calling out an unreleased Marvel Studios movie to praise the efforts of another Marvel movie within a review? That is SO Deadpool. Hang on, did I just mention that this was a review within the review. Breaking the fourth wall? Again, that is SO Deadpool!)

It can be a challenging prospect to write a review about Deadpool 2. Why? There is always a chance that the marketing team at 20th Century Fox (or is it Disney now? I can't keep up. It's as confusing as the X-Men timelines) could use what you say to work for one of their self-deprecating campaigns;

"Deadpool 2 is like an overstuffed chimichanga. Yes, it is tasty, satisfying and value for money at the time and you wolf down every morsel but you could wake up the morning after looking like Josh Brolin in an Instagram video wondering why you did it to yourself"

Or even worse, Ryan Reynolds himself might see it and print out a copy to call you out on your review right in the middle of (the inevitable) Deadpool 3: Dirty Harry.

So is it best to just stick to delivering something in the standard review format? Perhaps using WikiHow's guide to writing a film review?

1. Start with a compelling fact or opinion about the film
This film is the first Deadpool film to feature the number 2 in the title.

2. Give a clear well, established opinion early on
"Deadpool 2 is like an overstuffed chimichanga. Yes, it is tasty, satisfying and value for money at the time and you wolf down every morsel but you could wake up the morning after looking like Josh Brolin in an Instagram video wondering why you did it to yourself" (Oh dammit, see why did you write that? I told you not to earlier on. See above for details!)

3. Write your review
See above and below this line of text.

4. Move beyond obvious plot analysis
In Deadpool 2, our hero must save a kid from Josh Brolin's Thanos Cable, who has travelled back in time to kill the younger version of an evil mutant who is responsible for killing the people that he loves.
If I was Rian Johnson, the writer-director of Looper, a film about a man who must stop the older version of himself who has travelled back in time to kill a kid responsible for murdering the person he loves, I would be calling my intellectual property lawyers about now.

5. Bring your review full circle in the ending
See end of review where Deadpool picks up the young mutant and shows him off like the young lion in the musical number The Circle of Life in The Lion King... say what you want about the rest of the film, turns out Wade Wilson is spot on about Frozen ripping off Yentl for Do You Wanna Build A Snowman? But I digress!

6. Gather basic facts about your movie
Ryan Reynolds is the only actor to appear in all 65 episodes of Canadian TV show Hillside (1990)

7. Take notes while you watch it
"Remember to take the rubbish out when you get home. Recycling collection is tomorrow."
"Need more almond milk because I am a vegan millennial now apparently. When did this happen?"
"This reminds me. I must rewatch Green Lantern at some point"

8. Analyse the mechanics of the movie
There were no mechanics featured in the film. Sadly Jason Statham's The Mechanic also did not appear.

9. Watch it one more time.
Ryan Reynolds and Fox will be happy about that. Good thing I have an Unlimited card!

Okay, let's get serious for a minute. Something that this film cannot do. I mean people complain about the MCU undercutting emotional scenes with humour. This film has a bigger undercut than Brolin's hairstyle as Cable.

Deadpool was a huge success and it worked because of Ryan Reynolds' commitment to the project and the character. He is Wade Wilson in the way that Robert Downey Jr is Tony Stark. A perfect marriage of character and actor. Something that I'm sure Wilson and Reynolds would do if they were allowed.

The sequel makes no apologies from the outset in dialling everything that worked about the first one all the way up to 11 (just like Cable's gun) including pops at Hugh Jackman and Logan for upstaging them, a brief spot of fridging and a Bond-esque opening credit sequence.

Just like Instagram, this film has #NoFilter and absolutely everyone is a target including Marvel Studios, D.C. Comics, Stranger Things, The Goonies et all.

It's not that the film or schtick is tired yet, it's just exhausting. There are SO many jokes that is difficult to remember them all once you have left the theatre which kind of indicates that there wasn't a stand out (or balls out) joke beyond a basic Basic Instinct reference.

That being said is is still a wild, enjoyable ride for even if not all the jokes land, it doesn't matter because there is another right behind it. In fact, it is probably up there with Airplane for its joke-per-minute ratio.

The only major disappointment (beyond the Fridging of a major character which initially could have been a parody of that writing trope but sadly wasn't) was the over-reliance on CGI in the fight scenes (to the point where Deadpool cues one up with "Big CGI fight time") which meant that "one of the guys who killed John Wick's dog" is unable to truly show off what he can do with an action sequence. I guess we have to wait for the Fast & Furious spin-off with The Rock and The Stath. Speaking of which, wasn't it odd that with all the mention of "family" in the film that there were no references to those movies?
So bringing it full circle jerk. Like a superhero landing on the knees, Deadpool sticks to what he knows and delivers a hilarious, enjoyable, diverting comic book movie. Even if it is not one that will subvert the genre like the original.
Like Deadpool himself, as long as there are other superhero movies to take the piss out of, this is going to be one franchise that won't die and is likely to run and run and run just like Wade's mouth.