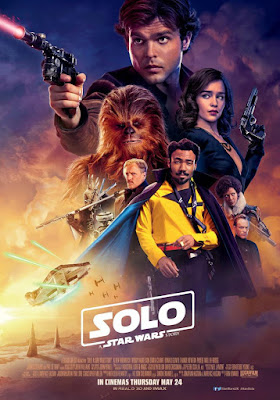 With another year to wait until we get another "Episode" Star Wars film, it is time for another "A Star Wars Story" film from Disney that plugs a gap in the cinema release schedule and the Expanded Universe backstory.
Just like Rogue One told the story of how the Rebels got the plans for the Death Star, this new film explores the backstory of the saga's most lovable rogue, Han Solo.
And just like Rogue One, this film is one that has had a route to the big screen even trickier than flying through an asteroid film.
Directors Phil Lord and Christopher Miller (21 Jump Street, The LEGO Movie) were fired by producer Kathleen Kennedy after filming 90% of the movie with too comedic a tone. This led to Kennedy bringing in Ron Howard to complete the movie and shooting 70% of the film.
This leads us to a situation where you have 160% of a film and a battle between two creative styles. How did it affect the story and performances? How would it all gel together? It is enough for anyone to say "I've got a bad feeling about this".

Safe to say the odds were against the film but as a certain someone might say, "Never tell me the odds".
Why? Because on watching the final film, there is no real hint of any issues with production.
With Rogue One, there were the expectations delivered by the initial trailer that ultimately featured many scenes that were not in the final film.
Here, for any viewers unaware of the behind-the-scenes problems, you would never know there were any.
As a reviewer, that is how one must approach the film as well. One cannot review it wanting and hoping they were watching the Lord and Miller version. In a similar way to wondering what Edgar Wright's Ant-Man would have been like. They must give Ron Howard's film a fair old crack of the whip instead (wait, wrong Harrison Ford character reference).
And here we arrive at the main issue with Solo: A Star Wars Story.
The production problems were never the problem. The issue here is that the entire film feels redundant and unnecessary.
When Han Solo first appeared in the Star Wars universe, sitting in the cantina in Mos Eisley, you knew exactly who this character was. From his brash boasting to Obi-Wan and Luke, to the way he coldly and brutally dispatched Greedo by shooting first. This short introduction told the audience everything they needed to know to set up his character in the universe.
There was never any need to see how he became the man he was at the start of Episode IV.
Do we need to discover where he got his gun from? No.
Do we need to see how he won the Millennium Falcon from Lando? No, he told us in Empire Strikes Back.
Do we need to know how he got the name Han Solo? No.
Do we need to know how he met Chewbacca? No but it is a nice scene and one of the highlights of the film.
And we certainly don't need to see a back story to those bloody dice which only suddenly became important at the end of The Last Jedi. Well I hate to break it to you Leia, but they reminded Han of another woman!!!
That woman is Qi'ra played by Emilia Clarke who is cast in the now standard Star Wars role of lead female character who is white, short brown hair and in her late-twenties/mid-thirties (see Carrie Fisher, Natalie Portman, Daisy Ridley, Felicity Jones).
Han and Qi'ra wish to escape Corellia together but when she is forced to stay behind, Han promises to return to free her and travel the galaxy together on a ship.
This promise is what drives Solo for the majority of the story, joining forces with a crew led by Woody Harrelson to pull off a job to win a huge payoff. When this goes awry, they are indebted to Paul Bettany's gangster Dryden Vos and forced to plan and pull off a daring robbery via the infamous Kessel Run.
It is here Solo is reunited with his love Qi'Ra, now in Vos's employ, and meets the other loves of his life; Chewbacca, Lando Calrissian and the Millennium Falcon.
Donald Glover steals the show as the charasmatic owner of the Falcon, along with his droid co-pilot L3-37 (voiced by Phoebe Waller-Bridge), who similar to Dobby in the Harry Potter films, strives for equality for droids.
But what of Alden Ehrenreich? The man with one of the most unenviable jobs in movie history. How do you step into the boots of Harrison Ford and one of the most iconic characters in all of cinema? Would that it were so simple.
Thanfully he is, more or less, up to the task. He never tries to do a simple impression of Ford. Instead, building his own version that one can see becoming Ford's seminal take on roguish smuggler.
In fact when we first meet the young Solo, he is lightyears away from the man we all know and love. He is wide-eyed, a dreamer and like a puppy in love. He is more akin to a young Luke Skywalker dreaming of escaping life on Tatooine.
Over the course of the film, events slowly shape and mould him into a more recognisable version of the character to the point where you can see him becoming this guy...

While the characterisation is there, the overall plot feels very perfunctory as it carefully but unimaginatively joins the dots to get Solo from to Chewbacca to Lando to the Falcon to the Kessel Run, etc, etc.
This is the last time Lord and Miller will be mentioned but a Lord and Miller-led adventure where you weren't exactly sure where it was going to go and how it was going to play out could have been just what the story needed to feel fresh and relevant. Ron Howard's studio-mandated film is rather pedestrian, tried and tested route. If Howard took the standard 20 parsecs to do the Kessel Run, Lord & Miller could have done it in less than 12. Riskier but the payoff could have been bigger.
The Last Jedi proved that the saga could (and should) take risks but with Solo, instead of "great shot kid, that was one in a million" it left this reviewer colder than carbonite.

NB: Please avoid the 3D print of the film which is incredibly dark and muddy
Posted by Dallas King at 04:04