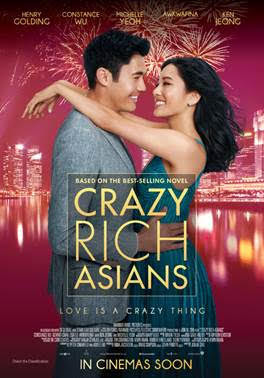 Crazy Rich Asians is a film that attempts to do exactly what it says on the tin.
The Asians who are featured in the film are "crazy rich", as in very, very rich. Obscenely rich.
Now this is where punctuation is incredibly important. Going into the film, I was expecting, and ended up hoping, that the characters were Crazy, Rich Asians i.e. the rich Asian people were also batshit crazy and the schemes they undertake to go about splitting up the central couple are deliciously devious and madcap.
Instead, the story and structure of this classic take on the romantic comedy is depressingly formulaic.
Professional woman is dating charming man. Man turns out to be rich. His mother doesn't approve of the match and decides to break them up. But of course, by the end they say screw their parents and get back together, gaining their respect along the way.
There is a scene in the middle of the film where the family make dumplings. It is a family tradition and they discuss the exact way the the dumplings must be made.
And in here lies the problem. The film feels like a standard, cookie cutter dumpling.
What this film needed was to experiment and evolve. Try something new with the recipe and create a exciting, spicy delight that moves the genre forward.
It might be perfectly tasty dim sum but the dim sum of its parts is not enough to get crazy in love about.