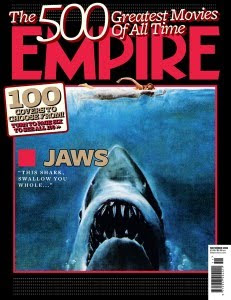 One of the week's main releases at The Belmont was JULIE & JULIA. It's based on the blog by Julie Powell as she attempted to work her way through Julia Child's cookery book 'Mastering the art of French cuisine', a total of 524 recipes, in exactly one year.
This got me wondering what the cinema blog equivalent would be. Working my way through a list of the greatest films of all time perhaps? But which list?
All the 100 greatest film lists that appear on E4 or websites are normally voted for by the public and they end up voting for their favourite rather than the best. Also 100 seems too easy to complete in a year.
IMDB has a Top 250 list but this keeps changing on a daily basis as new votes are added by their users.
That's when I remembered something and dug out my copy of Empire magazine from November 2008. In it was a list of the top 500 films of all time as voted for by 10,000 film fans, 150 filmmakers and 50 film critics. Now this is a list that should cover every base.
So I have now decided to work through this list of 500 films in exactly one year. I will update the blog and Twitter (@dallas_belmont) to keep track of my progress and give my thoughts on each film I watch.
Stay tuned and wish me luck.
Posted by Dallas King at 05:50