Empire - The Magazine Of My Lifetime 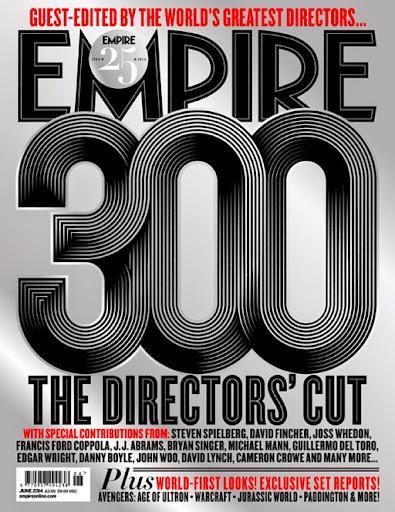 With this in mind I just wanted to share a few memories of Empire which is without a doubt "The Magazine Of My Lifetime".

I had been a film fan ever since I spent every Saturday afternoon of my childhood re watching my copy of Star Wars that I had taped off the TV (complete with ad breaks for Panda Rosa Metals and St. Andrews Woollen Mill, St. Andrews) but it wasn't until around 1996 that I started to take it seriously and build up a collection of films and knowledge.

I was helped by my English teacher (one of those younger, cool, hip ones who had a poster of Trainspotting on the classroom wall) who encouraged my curiosity and lent me VHS copies of films such as Blade Runner and Shallow Grave which led me to becoming a big Ewan McGregor fan and purchasing my first issue of Empire in July '96 featuring Ewan on the cover.

A lot has changed in cinema since '96: we got excited for the rereleases of Star Wars in 1997, Aberdeen got its first real multiplex (9 screens) and an independent art house cinema, we got excited about the Star Wars prequels, there was the fall and spectacular rise of the comic book movie from Batman And Robin to The Avengers, the return of 3D, the rebooting and remaking of every franchise and horror film and even though we should know better, we're getting excited about new Star Wars films.

The one constant throughout all that (beyond my hairdresser) has been the ever-growing collection of Empire magazines on my shelf. I've built up the collection over the years to the point I only need the first 14 issues (if anyone has spare copies kicking about...).

The anticipation of hearing that "drop" through the letterbox meaning that my subscription had arrived (sometimes complete with special cover) followed by my traditional 2-fold comic book-style readthrough: "The quick skim" (find out the review ratings, main articles, letters, pint of milk) followed by the in-depth analysis of every page.

I remember reading The Lost World issue back in '97 and getting very excited about a film called Swingers. Over the years it has brought films like Fight Club, Cube, Audition and Memento to my attention.

Of course, they can't get it right all the time. We don't need to dwell on "Clone-gate" that much, cause haven't we all got caught up in the moment and made snap judgements of films when we shouldn't have? I remember making a public apology on my blog to Channing Tatum following 21 Jump Street after some claiming his chunky knitwear in The Vow showed greater emotional range.

What always came through in the writing in the mag, whether you agreed with the review or not, was that these were genuine film fans just like you.

Before the Internet really took off, Empire was my only real source of movie news and gossip. It was kind of nice not to be completely bombarded and spoiled by constant updates on the production of the latest blockbuster.

The printed word has suffered in recent years thanks to the Internet (remember Neon, Hotdog, Filmstar?) but Empire has adapted thanks to its website, Twitter, weekly podcast and the adventures of Videblogisode Man to complement the monthly magazine which has now reached its 300th edition.

However for myself (and many others), Empire is more than just a film magazine.

It got me started on my film review blog when I worked my way through my (500) Films of Empire challenge which involved watching and reviewing every film on Empire's Top 500 list that was published in 2009.

That resulted in writing a guest blog on the website about the experience and led to me spending a week interning at the Empire offices.

But my fondest memories would have to be those wonderful weekends in August spent at the BFI Southbank (and O2 Arena) attending Movie-Con (and latterly Big Screen). 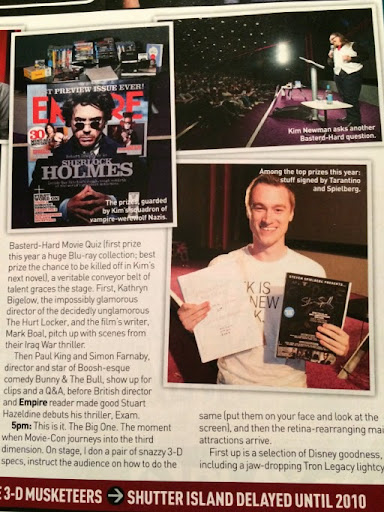 Not only did they involve two days spent in one seat in BFI 1 watching all the best previews from Comic-Con as well as screenings, spot prizes, Q&As, special guests (2009 saw TWO visits from Robert Downey Jr and in 2010 Thor director Kenneth Branagh brought along an unknown actor called Tom Hiddleston) and the Kim Newman Basterd Hard Movie Quiz (which I have the honour of being a two-time winner) but they saw the formation of a fantastic film-based friendship between a group of people affectionately known as "The Forumites".

Bonding over Empire's Internet forums in the lead up to the Con, those events were the chance for film fans to meet others with similar interests (including the Empire staff who are also genuine film fans above all else and lovely people) and has resulted in a terrific group of people staying in touch and organising several meet-ups and screening visits over the last five/six years.

So thank you Mark, Ian, Ian, Dan, Chris, Helen, Nick, Phil, Ali and everyone at Empire past and present for producing something that has helped entertain and inform me over the years, all the while fuelling and growing my greatest passion...

Oh and thanks for the iPad and copy of Empire signed by Steven Spielberg that I won at the quiz!

I live in hope that one day we will see Movie-Con V: Empire Strikes Back.