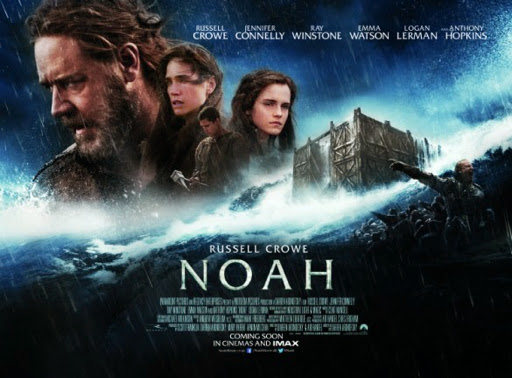 "It is as it was". Words the Pope used to describe The Passion Of The Christ and words that are unlikely to be used when talking about Darren Aronofsky's $125 million epic which plays less like the Sunday School story and more like a dystopian end-of-the-world big-budget episode of Doctor Who featuring rock monsters and a cockney villain.

Yes, you read that correctly. In this version of the story, Noah can be compared to The Doctor.

The character of The Doctor is often described as "a mad man in a box" and that is precisely what Noah can be described as in the second part of the story.

With the help of aliens from another world who are covered in rock, he constructs his massive box filled with at least two of every type of creature on the planet thus being seemingly bigger on the inside than on the outside, and proceeds to become increasingly unhinged as he is forced to make decisions that will affect the course of history.

He is told that the flood cannot be averted, hence it is one of those "fixed points in time" that Steven Moffat is so fond of in his tenure as show runner. This results in some tough choices which include leaving companions to die and contemplating infanticide when he believes that the race of men must be allowed to die.

There can be arguments made that the film is set in biblical times but also that it is a story set in a dystopian future where man has ravaged the earth with violence, war and destroyed its environment and the impending demise by water is not the wrath of God but the result of global warming.

God doesn't actually get mentioned at all in the film, rather it is "The Creator" but Aronofsky basically sticks two fingers up to Creationists with Noah's recital of the story of creation being set to a time lapse video montage of evolution!

Also because the end of the world at the hands of the creator is simply not enough, you need a human enemy to add that extra level of fear and hatred and so Ray Winstone and some extras from Game Of Thrones turn up to become the Raiders Of The First Ark.

And speaking of arks, Russell Crowe does an excellent job with his character's arc from protective family man to saviour to madman and anchors the film with a great performance.

It might be one of the most bonkers mainstream movies ever made but it features some stunning cinematography, an excellent score by Clint Mansell and is a thrilling, epic adventure that should have audiences going into the cinemas two by two if this kind of thing floats their boat.