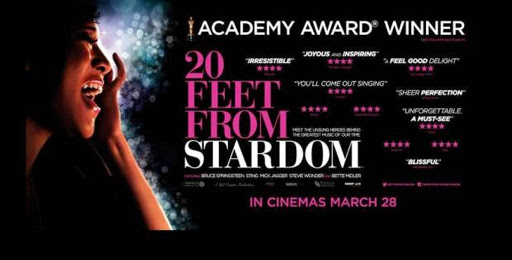 Yes, Twenty Feet From Stardom showcases the fact that women singing backing vocals are talented, that much is clear. Yet the film seems to be rather mixed in its messages. Some singers claim that they prefer staying out of the spotlight, yet appear in a film which will naturally bring them more attention and opportunities. Others claim they are trying to focus on pursuing a solo career yet appear as backing singers in other segments.

However there is some fascinating trivia to be found here.

There is also an interview with Merry Clayton who provided the iconic vocals on The Rolling Stones "Gimme Shelter".

There was disappointment when Tom Jones was featured in archive footage singing with some of the women appearing in the documentary but wasn't interviewed. It's a shame as Tom has sung with just about everybody and will gladly talk about it given the opportunity if The Voice is anything to go by.

"Now Darlene, she had a voice similar to Aretha. Now I know that, because I sang with Aretha you know..."

Still none the wiser as to why this won Best Documentary at the Oscars over The Act Of Killing but its an interesting talking heads piece that will get you tapping your toes in the aisle and digging out your old records when you get home... (or pressing shuffle on your iPod. Depends if anyone still has a vinyl collection anymore).