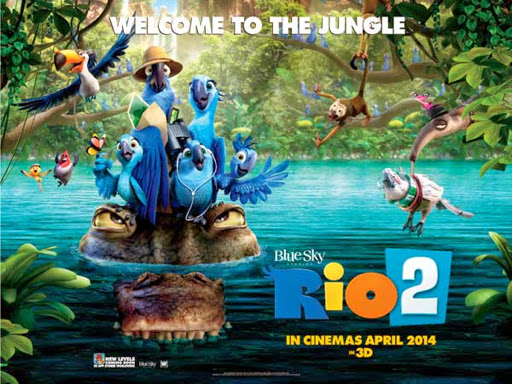 Having never seen the original Rio, there was some quick Wikipedia-ing during the adverts to find out what I'd missed and was relieved to see that it was not much other than your standard fish out of water (or bird out of cage) scenario so it would be easy enough to follow.

The neurotic, domesticated bird who has moved to Rio and learnt to fly and had children with the last female Blue Macau now has to deal with moving to the Amazon (not Amazon.com but that might have been funnier) when they discover a secret tribe of Macaus.

All of the voice return for the sequel so that must have been in their contracts unlike a certain Orange Wednesdays advert from a couple of years ago!

Not only did they pack in an inflated voice cast but they unwisely attempted to squeeze in too many subplots.

There is Blu attempting to win Jewel's father's respect; the handsome ex-boyfriend which promoted jealousy; the Ferngully/Avatar "outsider joins tribe to defeat threat to environment"; a Cockatoo revenge plot; Amazon's Got Talent auditions; the list is endless and no subplot is given the opportunity to be fully fleshed out resulting in an uneven mess.

At first I was surprised that Rio 2 wasn't released in June/July to coincide with the World Cup but I realised that a) Fox needed something to capitalise on the Easter holiday market and b) this film is possibly anti-football.

I say that because the home of the blue Macaus which is under threat from loggers is situated in Manuas. Now Manuas is where they have built a brand new football stadium which has been beset by problems ahead of the World Cup and the England game that will play there.

Are the loggers in the film there to bulldoze the land to make way for the football stadium? Or am I reading too much into the film?

Either way, with a plot stuffed fuller than a taxidermist's menagerie and prioritising random musical interludes that feel shoehorned in now Anne Hathaway has won an Oscar for Les Mis over jokes, the desire for any more Rio films is as endangered as the titular blue macau.