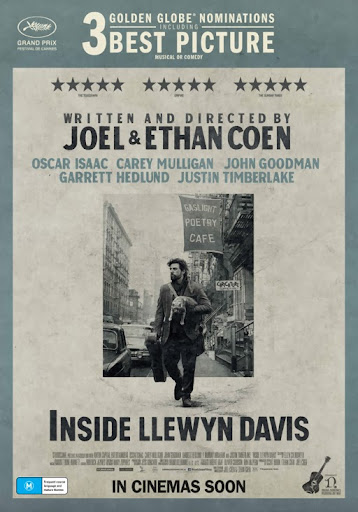 It's been six years since the Coen Brothers topped the charts with No Country For Old Men. Since then they have failed to recapture that magic.

Burn After Reading split opinion. A Serious Man alienated and confused the casual fans and a cover version of country hit True Grit had commercial success even if some of the lyrics were difficult to understand.

However the Coens are back to their best with an ode to the folk music scene of Sixties Greenwich Village.

Recruiting Llewyn Davis for lead vocals was an interesting choice. Originally part of a successful double act, one might worry he couldn't handle the pressure of carrying the show but his voice has a rawness and melancholy that draws the listener in.

His songs tell a story of the pressures of conformity, the price of fame and the journey one takes to truly find themselves and their place within the music scene.

One fears that Llewyn might be trapped in an ever repeating circle of failure and obscurity but this album will stand the test of time and he'll be remembered as an artist who deserved greater success (Oscar, I'm looking at you).

Davis was part of a scene that was rich with unique characters. Some producers might question the need for all these quirky character collaborations throughout the album but that is what the Coens do so well and they leave their stamp on the production that you can instantly tell who made it.

Stand out tracks include:

"Where's his scrotum?!" by Lillian & Ulysses the Cat

Inside Llewyn Davis, like the album of said name, might not be to everyone's taste but those who appreciate its quirks and charms will find a 4 star album filled with the odd 5 star song destined to be on repeat for many years to come.