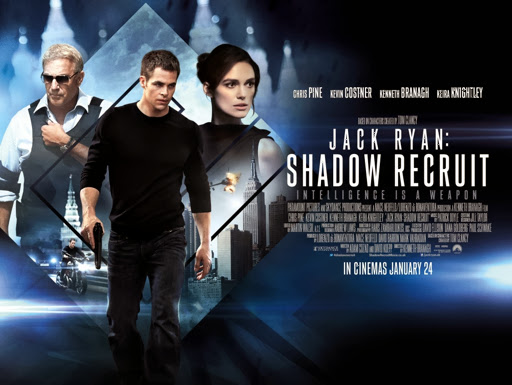 Not content with playing a new version of Captain Kirk, Chris Pine steps into the shoes previously worn by Alec Baldwin, Harrison Ford and Ben Affleck in this full system reboot of the Jack Ryan franchise... even if this is the first one to feature his name in the title.

Would the casual cinemagoer actually be able to tell you that The Hunt For Red October, Patriot Games, Clear and Present Danger and The Sum Of All Fears were all linked by the same character?

Quick as a flash we speed through John Patrick Ryan's, Jack to his friends, backstory:

He recovers in hospital where a date with Keira Knightley is used as an incentive to heal. Some might prefer to stay in a wheelchair! Bazinga!

He is also recruited by Kevin Costner to the CIA to work on Wall Street to follow the money and find potential terrorist groups.

Before you can say "America. F*ck Yeah!", Cut to ten years later and Ryan uncovers a plot by some stereotypical 80s bad guy Russians led by heavily accented Kenneth Branagh (pulling double duty as director too) to launch a terrorist attack on the US and then sell huge reserves of dollars to crush the economy.

Follow that? That's the simplified version that Costner asks Ryan to explain the plot to him (and the audience) in layman terms.

So in the words of Team America: World Police:


Can't say I'm looking forward to the sequel where he must rescue Keira and their newborn child in Jack Ryan's Daughter.