The Wolf Of Wall Street - review 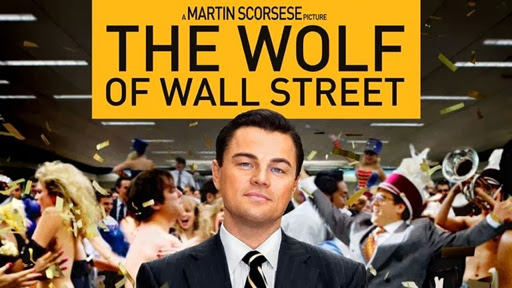 Wall Street, Rogue Trader, American Psycho, Wall Street: Money Never Sleeps, the news in general.
It would be fair to say that cinema hasn't painted the most flattering of pictures when it comes to bankers and traders and just when you thought it was safe to go back in the trading floor, along comes Scorsese's blistering biopic of Jordan Belfort aka The Wolf Of Wall Street.

Belfort made millions of dollars through selling dodgy penny stocks to wealthy people and pocketing the commission amongst other securities frauds. At least I think that's what he did. It's all financial mumbo-jumbo to most people and Belfort even breaks the fourth wall to tell the audience he's not going to bother explaining what he's doing as they'll never follow it anyway.

Besides this film is not concerned with exactly how he made his fortune but what he did with it once he got it.

This is a movie that is all about excess as Belfort and his cronies indulge in a copious amount of sex, drugs and a MPAA record-breaking number of F-Bombs.

Some have complained that the film glamorises Belfort and his lifestyle but it is the same as Trainspotting in that it is important to show the highs (why people become addicted to this lifestyle) in order to sell the lows and inevitable downfall.

This is a movie about sales and the entire cast sell the hell out of their roles.

McConaughey shines in an early scene imparting advice onto DiCaprio's Wall Street newbie, setting the tone for the rest of the film. Australian Margot Robbie delivers a flawless New Yoik accent, Jonah Hill is more than just teeth and tantrums and there is an entire portfolio of juicy cameos including Jean Dujardin, Rob Reiner and Joanna Lumley!

Yet this is Leonardo DiCaprio's film. With shades of the Goodfellas Henry Hill voiceover, DiCaprio is our (potentially unreliable) narrator on this career-best descent into quick cash and quaaludes. He is as comfortable charming his clients out of there money as he is a woman out of her panties, offering up the perfect amount of sleaze to seduce and repel us at the same time.

What is surprising though is how good DiCaprio is at comedy. Although not an out-and-out comedy film, it is funnier than most mainstream comedies of the last couple of years and in one hysterical sequence of physical comedy, Leo has to shuffle and scrape his way along the floor of a country club to get to his car after vintage quaaludes kick in.

Like Belfort after taking a Popeye-sized hit of cocaine, it feels like Martin Scorsese is firing on all cylinders, giving us a film with more energy and balls than filmmakers half his age. All while delivering a 179 minute long opus that feels like 90 minutes.

Leo was once rumoured to play Patrick Bateman in American Psycho but Belfort is just the type of Paul Allen, Grade A Douchebag that Bateman would take an axe to. He lies, cheats and steals. Buys into his own hype after being called "The Wolf Of Wall Street" after his first wife tells him there is no such thing as bad publicity and there is no thought or remorse shown for his victims. Why not? Because he probably didn't have any. This is a man who sold out his own friends to reduce his own sentence.

For those people that claim the movie glamorises Belfort, if you come out of this film wanting to be like him, you are probably already a complete and total banker.

Wall Street said "Greed is good" but Wolf Of Wall Street would say that "Greed is Motherf*cking Great!". It's lewd, rude and crude, un-PC and offensive and I for one fell for Scorsese's sales pitch and enjoyed every minute of it. I'm investing all my cash in Marty and Leo's next project.