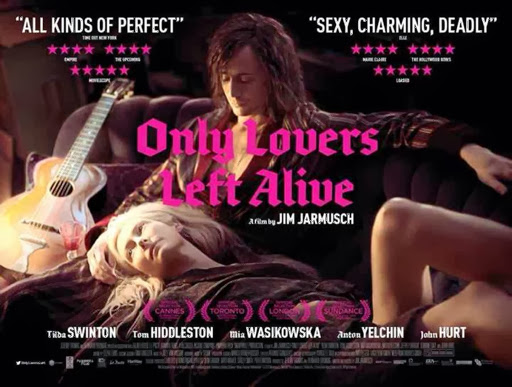 In spite of the constant thirst for blood and aversion to things like sunlight and garlic, there has always been something quite sensual and romantic about being a vampire.

An ability to appeal to the opposite sex, never growing old, eternal life, etc and let's face it, despite what Queen might have said, who wouldn't want to live forever?

But what exactly would vampires do with an eternity on earth?

Only Lovers Left Alive provides one possible answer to that question. They'd get bored!

Adam (Tom Hiddleston) is a Kurt Cobain-esque Gothic rocker recluse hiding away from the outside world in an old house in Detroit.

Eve (Tilda Swinton) is living in Tangiers, reading and hanging out in Souk bars with Kit Marlowe played by John Hurt.

Both are vampires and more importantly, husband and wife.

Were they the first of their kind? Unclear. As is the reason they live on opposite sides of the world. Perhaps they are just like any other couple and after centuries of being together they needed some time apart from each other.

And they have been around for centuries, that much is clear and even though they have spent that time cultivating knowledge of science, nature and the arts, Adam has grown tired of of the apathy of the "zombies" who inhabit the earth now, unable to appreciate the world and its cultural wonders.

So as he ponders a game of Russian Roulette with a wooden bullet, Eve hops on the next overnight flight to Detroit to pull him out of his slump.

Looking for a plot? There isn't one to be found here. This isn't a film about action or change, after all vampires don't.

This is a film about existence.

There is a melancholic scene where Adam describes to Eve how a giant theatre used to play concerts to thousands of people but now is crumbling and abandoned and nothing more than a car park.

Civilisations have come and gone and they are the only constant in each other's life.

It's a rather unique take on the mythology in how it showcases the normalcy of being a vampire.

Vampires might be allergic to sunlight and drink blood instead of red wine but there still human. They have family issues. They can hold a grudge, "Are you still made about that? It was 87 years ago." and they moan about having to get up out of bed to feed.

Here the vampires feast on blood taken from hospitals not because they have turned "vegetarian" like those who "sparkle", or dislike killing but because they are worried about the purity of the source, disdainful of the diseases and drugs that the "zombies" Adam refers to pollute their bodies with.

Rather ironic since they treat it more like a drug than food, feeling a euphoric high after every hit.

This is just a drop from the rich vein of dark humour running throughout the film, such as Jeffrey Wright's various nicknames for Adam dressed in a Doctor's outfit (Faust, Strangelove, Caligari) and the hints at the influence of vampires over such artistic legends like Wilde, Shakespeare, etc that appear on a wall of fame.

Many of the film's biggest laughs come from the unwelcome arrival of Eva (Wasikowska), Eve's "sister", the closest the film comes to having a Deus Ex Machina, injecting some (after)life into proceedings.

The script's wit is as razor sharp as their teeth and dripping with deadpan delivery by Hiddleston and Swinton who are both able to hint at the old souls behind the young eyes of these eternal creatures of the night.

Shot with an ethereal beauty and a killer soundtrack, it can easily stake a claim as the best vampire film since Let The Right One In.