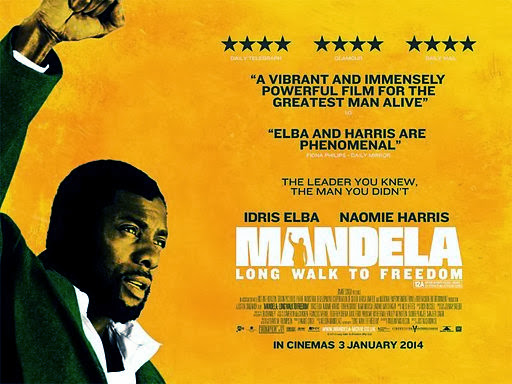 Mandela: Long Walk To Freedom feels like exactly that, a very long walk due to the decision to try and tell Nelson Mandela's entire life story in one poorly paced film.

Mandela is one of the most inspirational political figures of the last century and a man who had struggled, fought and accomplished so much in his lifetime that it is near impossible to show all that in a 146 minute feature film.

Idris Elba gets the iconic voice spot-on and impresses in the early scenes but the 50 year age range covered in the film is too wide to be played by an actor of 41.

Hampered by some unconvincing make-up, the later scenes fail to resonate as the film fails to show the true effects of 27 years imprisonment as Elba's Madiba still looks capable of putting a beat down on a Kaiju or two at the age of 72.

Last year's Lincoln worked, not just because of Day-Lewis's performance, but by focusing on one specific time in his life; the fight to pass the 13th amendment.
This film would have been more successful if it had followed suit and looked at his trial and subsequent time in prison, the campaign for his release or his run for President with the ANC party. Obviously they couldn't do the 1995 rugby World Cup as Clint Eastwood and Morgan Freeman beat them to it with Invictus.

Instead we get every step along that long walk which for some reason includes 30 minutes of painting him as a bit of a player when he was younger; different woman every night, affairs, bad father, etc.

This is certainly one case where it would be better to read the book rather than watch the film. That, or watch a documentary about him instead.