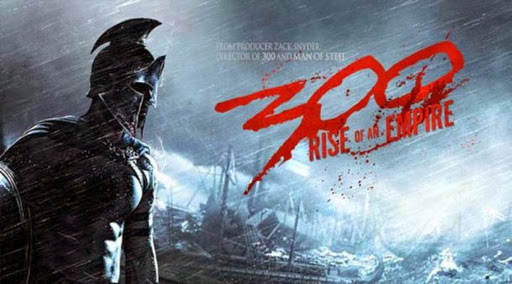 In history, the legend of the 300 who fought at the battle of Thermopylae was the spark that united the Greek Empire against Xerxes's Persian Army.

In Hollywood, 300 was the spark that ignited the careers of Gerard Butler as a leading man, director Zack Synder and his love of slow motion and a general feeling of inadequacy from male cinemagoers when confronted by 300 sets of perfect abs!

This film follows Athenian Themistokles as he takes his selection of over-oiled and under-dressed warriors to the seas to fight against the Persian Armada led by Armetesia.

The entire film can be summed up by paraphrasing these lyrics from the band Lonely Island.

We're on a boat and, it's going fast and
It's a nautical themed 300 fight plan
We're the kings of the world, on a boat like Leo
If you're on the shore, then you're sho not me-oh!"

While the first one wanted to be a serious action movie that happened to be the most homoerotic film since Top Gun, this sequel embraces the campiness and plays the whole thing with a knowing wink to the audience. Just witness Thermistokles reaction when he is asked how his meeting with Artemesia went.

The slow motion and digital blood are dialled up to 11 to pacify those who came for the action but anyone looking for award-winning dialogue should look elsewhere with such gems as "He had the stink of destiny", "Shut your cockhole", "Have you come to stroke your cock watching real men?" and "You fight harder than you f*ck" are uttered over the course of battle.

Are there 300 reasons to watch Rise Of An Empire? No, in fact there is only one... Eva Green.

Green's performance as the scorned Grecian Armetesia who seeks revenge as leader of the Persian Navy is SO crazed, demented and OTT that she towers over the entire cast including the 10 foot tall God King Xerxes. Equally comfortable killing soldiers who fail her in battle, manipulating Xerxes for her own ends, seducing Thermistokles or fighting him in sword to sword combat, it is a truly ferocious turn that will go down in legends of its own in terms of scenery chewing and scene stealing.

Will it be as big a smash as the original 300? No. The only things being smashed in this Greek tragedy will be the plates down the local taverna.