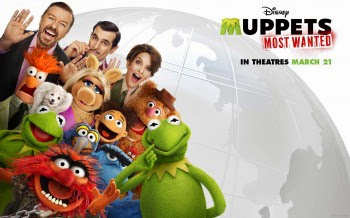 The Muppets say it themselves in the opening number of The Muppets: Most Wanted when they quietly sing "Everybody knows that the sequel's never quite as good".

If The Muppets was that feeling of seeing an old friend after a number of years and it's like you never been apart; sharing the same old jokes and anecdotes, etc, then Muppets: Most Wanted is that stage where after a couple of hours, the old jokes aren't as funny anymore and you realise why you never make the effort to hang out together more often.

Muppets: Most Wanted does have everything you are looking for from a Muppet movie: jokes, songs, an exhausting list of celebrity cameos, etc, etc but none of them feel as fresh and fun as the last one.

The human element is where the film is lacking the most ooomph, with no one matching Segel and Adams pure joy an enthusiasm for the product. It doesn't help that Gervais, Burrell and Fey are more caricatures than characters.

At least they continue their trend in developing new muppets with number one bad guy Constantine gets a lot of comedy mileage from his impersonations of Keeerrmit the Frog.

The Muppets might be together again (again) but if they don't recapture that magic soon they won't be everyone's most wanted for long.