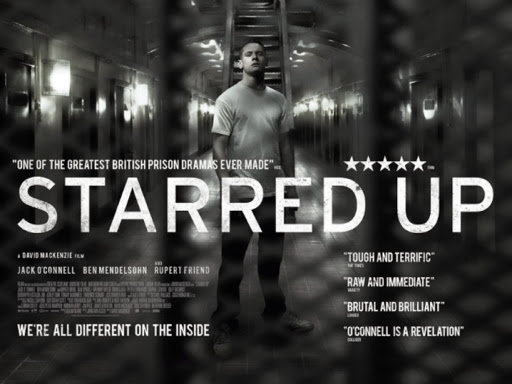 During the opening scenes of Starred Up, it felt like Jack O'Connell's Eric Love had clearly watched other British prison movies like Scum and Bronson before being incarcerated because within five minutes of being locked in his cell he has made himself a makeshift knife (or Shiv) and unpacked his baby oil to grease himself up when fighting the guards and screaming "Come on you F*CKING C*NTS!!!"

But there is no point in Eric shouting "I'm the daddy now" in this prison because that role is taken by his actual father Neville (Ben Mendelsohn) who could prove to be both a help and a hindrance.

Mendelsohn is a complete chameleon as an actor, as there are times I don't even realise that it is him until halfway through a film (listing The Dark Knight Rises, Killing Them Softly and The Place Beyond The Pines as example).

Both Mendelsohn and O'Connell are both fantastic as the father/son dynamic continually shifts and evolves in a film that is filled with so much testosterone and tension, you are on the edge of your seat with a feeling of anxiety and dread because tempers could flare and violence erupt at any moment.

This is no Frank Darabont movie. There is no redemption for Shawshank, Love or anyone else here. Only terrific performances and an interesting take on the reunited father/son dynamic. Consider it "The Green Street Mile".