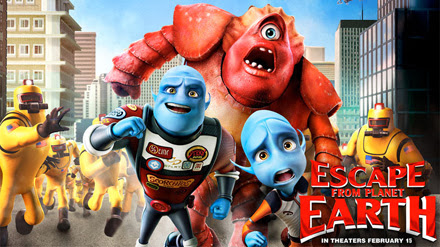 There is a growing trend in movies that technological advances such as mobile phones and the internet are being attributed to alien species. See The Network in The World's End and a group of aliens forced to work in Area 51 in Escape From Planet Earth.

They might be able to create the iPhone or Facebook but its a shame that they cannot create any new or interesting ideas for this animated film which grows increasingly tired and formulaic as it goes on.

The alien/human juxtaposition has been frequently used in kids animation over the last few years in the likes of Planet 51 and Monsters vs Aliens and even the family sub plot that sees the geeky techie older brother having to rescue the macho heroic older brother brings nothing new to the table.

The vocal cast are bland and add little to their characters. So much in fact you may not realise that actors like Brendan Fraser, Jessica Alba and Sarah Jessica Parker were in it till the end credits.

There is nothing in this movie to hold the attention of adults in the audience who may find the whole experience as bum-numbing as an alien probe.

Escape From Planet Earth? You'll wish it was still locked up in Area 51.

P.S. if anyone can tell me why a very specific musical cue and visual gag from The Artist was used in a sci-fi alien animation, answers on a postcard please.