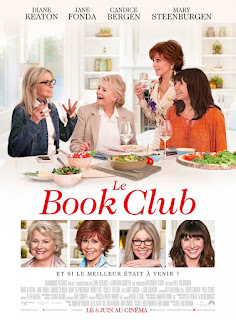 Just as you shouldn't judge a book by it's cover, you shouldn't judge a film by its poster.
However this poster is a fairly accurate representation of the film in just how relevance and importance the actual "book" part of the book club has to the film. Can you make it out on the poster? It is there I promise you.
That might be harsh because for all I know most book groups might be a mere front for drinking copious amounts of wine and gossiping about men!
Beginning with a voiceover from Diane Keaton's character, it introduces the audience to the four main protagonists who formed a book club and have been meeting for forty years now.
There is the one who talks via narration (Keaton), the one who is sexually dominant (Fonda), the career minded lawyer (Bergen) and the meek, family oriented one (Steenburgen).
If that line up of characteristics sounds familiar, it does feel like a script for a potential sequel to Sex And The City set 30 years after the original that has been reworked to sell to a studio by including a rather tenuous link to a popular novel. Just like Fifty Shades of Grey and Twilight then!
How tenuous you ask? Well at one point Fonda tells the group "50 million readers can be wrong" only for a minute later to have one of them reading the book with the back cover stating "Over 100 million copies sold" which shows how little the film cares about the book.
In the 2002 TV series The Book Group and 2007 film The Jane Austen Book Club, the plots of the books that were being read become part of the characters lives and influence the story.
Here beyond a few initial smutty jokes, there is very little in the way of plot references.
*Spoilers* There is only one post-coitus scene in the film which is not very progressive for a film about women reclaiming their sexual power*
Instead it is just a rather bland, formulaic, poorly written romantic comedy... just like Fifty Shades then!
(For those who are saying Fifty Shades wasn't a comedy, you clearly didn't see the film I saw)
If the filmmakers wanted to try to convince audiences that this movie was about a book group, they could have included at least one scene of them actually reviewing one of the books let alone all three of them.
The biggest difference between the Fifty Shades trilogy and Book Club is simply the sheer amount of talent attached to the material.
Between the top six names on the cast list are 5 Oscars, 11 nominations, 10 Golden Globes, 37 nominations, 4 BAFTAs, 9 nominations, 7 Emmys and 15 nominations.
Which begs the question? Why are they all starring in this?
At one point Bergen says of Steele's character "She should never have signed that contract!". The same could be said of all these great actors.
Much has been made of the argument that there are not many good roles out there for women of a certain age. Was this script all that was available?
Similar to choosing Fifty Shades of Grey for a book group, was there really no other options?
Particularly when this film was written and directed by a man.
It is an strange situation because European cinema has shown recently that there are great films out there for women such as Elle and Let The Sunshine In so why is America and the UK flagging behind. I say the UK because unless you are a Dame (Dench, Smith or Mirren) your options are still limited. And obviously there is the Streep exemption as well.
The women here still show a sparkle in the eye and have a joie de vivre. Keaton's subplot involves her two daughters believing she is over the hill and unable to look after herself but she learns to stand up to them and say she still has a life to live and leaves them to go enjoy it.
Here's hoping that Keaton, Fonda et all get the chance to have that big screen renaissance in real life too.