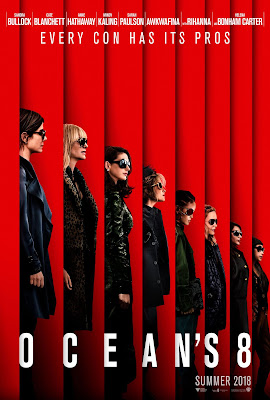 Ocean’s 8 is a prime example of the perfect con. The unsuspecting punter is sucked in to the film, entertained and astonished by the array of talent on show and it is only once they have left the cinema that they realise they’ve been had.
The plot holes start to appear and you begin to over-analyse everything you’ve just witnessed but sometimes you can just accept it and admire the sheer audacity of the crew involved in stealing 110 minutes of your time and your heart.
Here, unlike the infamous Ghostbusters reboot, a group of women have seamlessly and effortlessly stolen a franchise from the men and the audience will have no complaints.
At no point during the film are you left thinking, “I wish there were more men in this film”. In fact any time a male character was introduced, it was like “Meh”... and not just because one of those men was James Corden!
If anything, it would have been nice to just spend more time getting to know the team as some of the characters are criminally underserved by the script.
Of the seven members of the crew (yes, seven. We’ll get to why it is called Ocean’s Eight in a minute), here is a quick ranking of them based on screen time and impression made:
Yes, the film might pass the Bechdel Test with flying colours and Rihanna sinks the memory of Battleship but one can’t help but wish that more time had been spent introducing the characters and scenes of them interacting as a group.
This is an odd request because the film does take its time in getting through the first act before the heist begins and a lot of that is on the shoulders of writer/director Gary Ross.
Ross is probably best described as similar to Ron Howard, “a safe pair of hands”. His films come in one time, on budget and meet expectations but he is not really known for a particular visual style or flair.
This is something that Steven Soderbergh (director of the Ocean’s trilogy) has in spades and brought to Ocean’s Eleven in particular, giving it a pace and polish that allowed it to zip through exposition effortlessly and introduce characters quickly and with charm and hutzpah.
It is what Eight is ultimately lacking to give it some extra energy and help raise the stakes because the biggest problem the film has is that the stakes never feel all that high. It never feels as though the outcome of the heist is ever in jeopardy.
The film doesn’t need the “getting revenge on the former boyfriend” subplot and could easily have been reworked as a plot about getting even with a former female partner-in-crime and it would have worked just as well.
I know that Debbie Ocean has been planning the job for 5 years, 3 months, 12 days or whatever but in that time the filmmakers could have added a bit more polish to the script or editing.
Of course that is not to say that there are no diamonds in the rough. Quite the opposite as there are elements that shine bright like a diamond (Rihanna reference), brighter than the Toussaint necklace that is the prime mark of the Met Ball heist.
Anne Hathaway is delightfully ditzy as movie star Daphne Kluger who is hosting the Met Ball; the shock realisation of how good Sandra Bullock is at speaking German; the delight of creating a subplot in your head that Bullock was the woman who plays off star-crossed lovers Blanchett and Paulson in a sequel to Carol; and a whole five stars just to the costume designer for Cate Blanchett who is dressed like the goddess she is in every single frame.
For those of you good at maths, you will notice a slight discrepancy between the title of the film and the number of people in the crew. This is one con that won’t take a genius to work out given how the film plays out and certain aspects of the promotional campaign.
Ocean’s 8 tagline is “Every con has its pros” and this perfectly encapsulates the end result. Just like a diamond, it has flaws but you’ll be too dazzled by its beauty to care all that much.