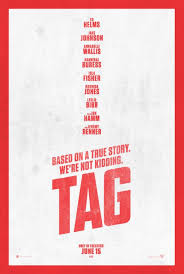 Tag, as the poster emphasises, is "based on a true story" that sounds too bizarre to be true. It is inspired by a Wall Street Journal article about a group of friends who had been playing the same game of tag since childhood.
Would a big screen adaptation be able to turn this strange tale into something cinematic?
Will Tag be a case of "You're hit!" or "You're Shit!"?
An amusing prologue where Ed Helms' character Hogan "Hoagie" Malloy gets a job as a janitor at Jon Hamm's company for the sole purpose of tagging him while being interviewed for the Wall Street Journal helps to set up the premise.
Every May the friends play an elaborate game of tag that involves pranks, subterfuge and a lot of cross country travel. The film comes at the story from a "men on a mission" angle as Ed Helms character gets the gang back together to join forces to take down one particular man.
Their target is Jerry (played by Jeremy Renner), the member of the group who has never been tagged in 30 years and is planning on retiring undefeated at the end of the season. At least it answers the question of what Hawkeye was up to during Infinity War. Playing tag.
The group see their opportunity with only a few days left in the competition as Jerry is getting married, potentially leaving himself exposed.
However, Jerry is the best to ever play the game and has superhero-level skills and reflexes to help him avoid being tagged and take down the gang. And so begins an all out war that threatens to not only disrupt the wedding but also the group's lifelong friendship.
The tag scenes themselves are well staged. From Renner's spider-sense narration of talking through how he will defeat his enemies to an incredibly effective homage to Predator as Jerry takes out the group one by one in a forest next to the country club hosting his rehearsal dinner.
But deep down, the film understands that this is story about friendship and the plot feels more akin to a high school reunion movie as the group come back home, meet old flames, reminisce about old times and reevaluate their futures.
The ensemble cast have good chemistry together and you have each archetype; Jock (Renner), Stoner (Jake Johnson), Success (Jon Hamm), Sad sack (Ed Helms) and if this was South Park we know what Hannibal Buress's character would be called.
While their on-screen relationship is believable, it would have been good to see more time spent on characterisation. Buress is dealing with some mental health issues and Renner is a recovering alcoholic but the group gloss over this fact to use the meeting to try and trap him rather than help him.
If the characterisation is given short shrift, then the same can certainly be said for the female characters who have nothing really to do expect act as enablers or obstacles to the challenge.
A quote that is repeated throughout the film is "We don't stop playing because we grow old. We grow old when we stop playing".
There is certainly a danger that with a feature length film about tag that the playing of it could get old real fast but it has enough charm and heart to keep audiences game for a laugh.

Plus bonus points for bringing Mmm Mmm Mmm Mmm by Crash Test Dummies back into the social consciousness.