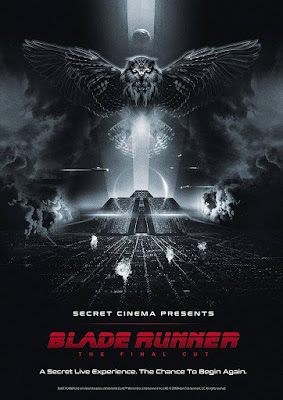 "It's too bad she won't live. But then again who does?"

This past weekend I had the opportunity to truly discover what it was like to live within my all-time favourite film Blade Runner: The Final Cut thanks to Secret Cinema.

For those in on the secret, Secret Cinema have been THE company when it comes to Event Cinema, providing immersive, interactive experiences relating to a film that is screened at the end of the night. When it first began in 2007, it really was a secret in that the audience did not know what they were going to see until they got to the event.
It has grown and grown over the years to the point now where the film selections and productions have become so big that the "secret" is out in order to guarantee ticket sales and buy-in from the customers e.g. Back To The Future and The Empire Strikes Back.
But with an inflated price tag of £45-£115, equivalent to a concert or West End show, come inflated expectations. 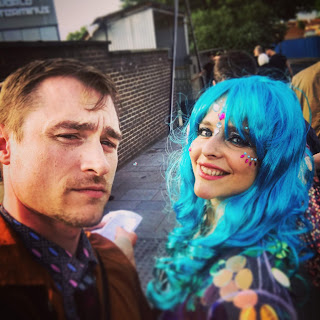 Having signed up for a new life that was awaiting me on the off-world colony of Utopia, I, Henry Carradine, arrived at World Terminus with a group of my scavenger/dreamer friends to begin our journey. Albeit scavengers who had scavenged costumes off people who looked suspiciously like Rick Deckard and a cosmic Katy Perry.
Sadly the LAPD deemed us not worthy of travel and revoked our identity papers and placed us in a holding pen to watch the rich and powerful breeze by to their new lives.
It was within this pen that we learned of the resistance, a group sick of this world and the injustices they endured. But no longer. For tonight, they would execute Operation Blackout which would reset the clock and level the playing field for everyone.
If the blackout sounds familiar, the writers of Secret Cinema have cleverly tied in to the events that lead into Blade Runner 2049 with a blackout that erased all digital records allowing replicants to disappear without a trace and remove barriers of wealth and class to the rest.
I won't go into the plot too much further but once we were smuggled inside we were given missions and had the opportunity to interact with characters that many would recognise from the original film.
Other guests with different character types (detectives, entertainment models, replicants, etc) all had different mini-missions and there was the immediate temptation to return to try another story thread.
But don't worry if getting into character isn't really your thing or you reach a dead end because you are unable to locate Zhora within The Snake Pit and are refused entry to the dressing room area even when you claim to be from the Committee of Moral Abuses!
For there is so much to see and explore that you won't even care. You will be too busy trying to reattach your dropped jaw to the roof of your mouth.
The level of detail in the recreation of 2019 Los Angeles is simply astonishing. I spent the first twenty minutes just trying to take it all in. There is the noodle bar; check out the digital ad screens for Coca-Cola and Pan-Am; woah, was that Rachel that just walked past?; I wonder if I could buy an artificial owl from Abdul Ben Hassan?
The organisers (L.A.P.D. officers) make you seal your phone in a bag prior to entering the world so you are unable to take photos and share/spoil the experience for others. Part of you will wish that you could capture the memories forever (like Leon and his precious photos) but there is something refreshing about not being on your phone the whole time and being able to absorb and savour every little detail.
I had previously attended the Star Wars event but the quality of the acting and commitment to the characters from all the actors (and guests) was out of this world for Blade Runner and added to the whole experience.
Having gotten a tip from a Replicant singer, we made our way to The Snake Pit where the storyline reached its climax in a thrilling way which was completely in keeping with the universe.
Following that, there was just enough time to order some noodles before taking our seats for the main feature.
With so much energy and focus put into creating this interactive world, it is always a risk that the projection of the film may not be up to the same level. Especially as you are watching it in a converted warehouse and not a cinema auditorium.
However the projection is excellent both in terms of picture and audio. The only problem is that due to audiences enjoying the bars and food stalls for two hours previously, many of them need to visit the bathroom so there is a lot of movement but nothing that will ruin one's enjoyment.
I mentioned previously that Blade Runner is my favourite film of all-time and one of the reasons I love it so much is that I seem to notice something knew every time I see it.
This time it was just how childlike Roy Batty is at some moments, in keeping with the fact that his mind is really only four years old and testament to Hauer's performance.
The other reason is that every time I genuinely change my opinion on the central question of the film; Is Deckard a Replicant?
This time? I would say that he is human. My reasoning this time? Replicants are unable to empathise. This is the reason that they fail the Voight-Kampff test. In the film, Deckard gets very emotional every time that he "retires" a replicant. This leads me to think that he is human and Roy saves him at the end to save his humanity which he has rediscovered through Rachel.
Am I right? Ah, we will never know and part of me loves that mystery. Sorry Ridley.
Without a doubt, this is the greatest and most immersive event that Secret Cinema have put on and I applaud them for that. "You've done a man's job sir". It will be hard for them to top it but I look forward to seeing them try.
Philip K. Dick asked the question, "Do androids dream of electric sheep?". I don't know about androids but I know I will dream of my night in Los Angeles 2019 and unicorns for many a night to come.
So to sum up and paraphrase Batty's final speech...
"I've seen things you people wouldn't believe. I've watched a sea of people dancing under umbrellas in the Los Angeles acid rain. I watched Roy Batty take down a squad of Blade Runners without breaking a sweat. Without being able to take photos at Secret Cinema, all these moments will be lost in time, like tears in rain..."

Secret Cinema presents Blade Runner The Final Cut runs till 8th July and you can get tickets here.

1) Bring your umbrella - You will get wet!
2) Take old photographs - Old memories are essential for bartering for information or entrance to secret areas
3) Don't bring cash - all bars and food stalls take contactless payment. Even if that means you will end up spending more than you planned!
4) Do dress up according to your character - Don't come straight from work in your normal outifit. You will get picked on by the actors as my friend discovered.
5) Once the film is over, make your way to The Snake Pit where you can dance the night away with replicants and blade runners side-by-side. Even if the music selection is not in keeping with the 2019 setting i.e. Beyonce, Outhere Brothers, etc.
Posted by Dallas King at 00:09