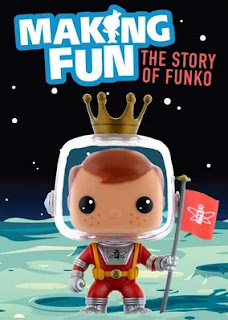 Coming off the back of the fascinating Netflix series The Toys That Made Us, comes a documentary called Making Fun: The Story of Funko.
Where the TV series focused on the toys of our childhood such as Star Wars, He Man, Transformers, etc. the subject of this new film is the Funko company, a relative newcomer to the toy and collectable game but one of the genuine phenomenons of the last twenty years.
And phenomenon is really the only word to accurately describe the company that started out in Mike Becker's garage in Snohomish, Washington in 1998.
Even if one doesn't own a Funko Pop, it is impossible not to be aware of them. Just go into any HMV on the high street and there seems to be more space on the shelves dedicated to Funko than there is for vinyl records or CDs.
The film starts by looking at the origins of the company that was set up by a group of friends making "Wacky Wobbler" bobbleheads of Big Boy and how their designs, creativity and fun attitude to the business led to a dedicated fan base called Funko Fanatics or "Funatics" who would help grow the company into what it is today.
In 2005, Becker sold the company to Brian Mariotti who developed key licencing agreements with the likes of Star Wars, DC Comics and Marvel that would take Funko to the next level. Giving them Cate Blanchett to essentially print money with every new item.
In 2011, the company released their very first Funko Pop. These are the iconic toys that everyone will know with the unique shape with the Stewie from Family Guy over-sized head and anime style face.
According to the doc, some original fans were not too keen on the new design, having built their collections on the wacky wobblers but it brought them a whole new audience and the rest is history.
The rest of the documentary spends time with some of the fans talking about their collections, fandom and what the toys mean to them as they all gear up for Funko open their new headquarters and landmark store back in the hometown of the company, Everett Washington.
It is at this point the film feels less like a documentary and more like a marketing puff piece to showcase how great the company is.
It is nice to see people passionate about the toys and collecting but it never delves deeper into the darker world of collecting; such as watching people fight at a comic-con over a limited edition Pop, or the ones who would "flip" the toys i.e. buying them and then selling them online for a profit which is something that happens a lot.
Ultimately, while a sweet starter for 10 look at the company, it feels as empty as the inside of a Funko toy's head and lacks a killer edge to make it really Pop!