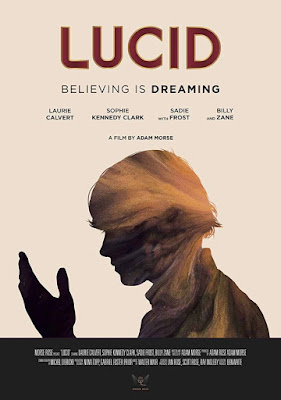 Synopsis:
Timid Zel (Laurie Calvert), adrift in a city with no friends, simultaneously craves and fears intimacy. His eccentric neighbour, Elliot (Billy Zane), offers to help him try and win over dancer Jasmine (Felicity Gilbert) using an experimental form of dream therapy. While this so-called lucid dreaming helps him change and become more confident, his lust leads him on a dark adventure and the question remains as to whether he can charm Jasmine in reality.

Laurie Calvert delivers a quirky but sympathetic performance as Zel, a young man with a potential history of mental health issues who is plagued by a crippling shyness and inability to talk to girls. He makes the decision to listen to his friend Billy Zane (he's a cool dude) and starts to experiment with Lucid dreaming in order to practice wooing his dream girl who lives in his building.
Descending into the dream world, Zel immediately appears more confident, not only in terms of action but appearance as well (although one wonders why the decision was made to give him a hairstyle that resembles Donald Trump's). He is able to become the man he wishes he could always be; standing up to his bully of a boss and speaking to the woman in his life.
Imagine Inception except instead of an idea, the goal is to plant the seed of love.
This confidence starts to transfer over to the real world but the more and more Zel experiences with lucid dreaming, the more he begins to lose his grip on reality and is unable to determine which world he is in and in control of.
Lucid is a confident debut from writer/director Adam Morse who experiments with lucid dreaming himself. Even going so far as to rehearse shooting the scenes in his head in advance while asleep. What is even more astonishing is that Morse revealed that he is actually registered blind just one week ahead of the film's premiere in Edinburgh.
Any visual impairment that the director suffers from is certainly not evident in the visuals on screen as it has differing palettes for the real and dream worlds that slowly converge the deeper Zel goes.
There is bound to be some frustration from audiences relating to the ending but it is important to remember that this is not our lucid dream it is the director’s.
He is in control and the thing with dreams is they never end exactly when we want them to and that is what the film does well and will lead to some interesting debate and discussions in the foyer after the credits roll.

To listen to interviews with director Adam Morse and lead actor Laurie Calvert, check out this episode of the Filibuster podcast on The Nerd Party.