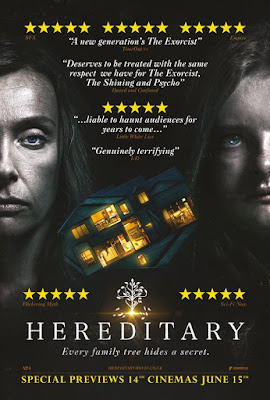 From the very first shot that slowly tracks in to a model house only for it to seamlessly transitions into real life, it is clear that the audience is in the hands of a master of horror.
What is most shocking about Hereditary, and there are a LOT of shocking moments, is that this "master", Ari Aster, is a first-time writer/director. The film feels so assured, controlled and effortless in its slow build and execution that the only explanation can be that his parents made a pact with the devil and the ghost of Kubrick.
The theme of control looms large over the film. Aster is always in complete control over the story but he is the only one.
Just like the small scale models that Toni Collette's Annie makes are designed and controlled by her mood and desires, the central family are merely pawns in a wicked game and have no control of their own destiny.
It is clear from the outset that something is not right. Annie's mother, whose funeral opens the film, was obviously into some odd pastimes and hobbies but the exact nature of which is left to the audiences imaginations. A clever move on the part of Aster who knows that what the audience conjures in their imagination can be infinitely more terrifying than anything physically manifested on screen.
That is not to say that there aren't images and shots in the movie that will chill your blood to the bone and imprint themselves on your soul till the end of time.
There is one particular shot that will be discussed more than any in the film and rightly so. It is the cinematic equivalent of a "Retweet when you see it" meme on Twitter where you can feel the realisation slowly and surely trickle through the auditorium. It is proof of Aster's skill and mastery of score, lighting and camera placement all coming together to produce something truly terrifying.
While this is the scariest film of the year, before it dials up the Kill List-esque levels of "What. The. Actual. Fuck" in the third act, Hereditary is one of the best character studies of grief that you will ever see.
Drawing from horror classics such as Don't Look Now and The Babadook, the raw, emotional anguish is palpable and it is heartbreaking to see the family being torn apart by being unable to express that grief and pain. Instead it drives them further apart as dark secrets slowly emerge from the cupboards like a graveyard worth of skeletons.
A lot of credit must go to Toni Collette who is simply incredible as the mother who, similar to Essie Davis in The Babadook ,may be dealing with some mental health issues beyond grief. It is a performance that deserves awards attention and hopefully can break through the stigma of being in a "horror movie".
Like the roots of this family's twisted family tree, Hereditary slowly grabs a hold of you and the sense of creeping dread works its way up from the ground until you find yourself paralysed with fear. Indeed by the end of the film you will be so tense you'll need to double check for Rigor mortis.
Exiting the cinema in a complete daze, utterly shell-shocked by what one has just seen, don't lose your head. Just keep repeating "It's only a 5 star movie, it's only a 5 star movie, it's only a 5 star movie".