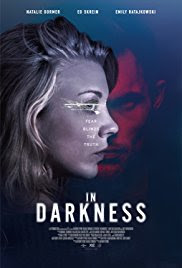 Synopsis:
Game of Thrones star Natalie Dormer is terrific in this psychological revenge thriller directed by Anthony Byrne from a script co-written by Dormer and Byrne. Dormer plays Sofia, a blind musician drawn into London’s criminal underbelly when her neighbour Veronique (Emily Ratajkowski) dies in the apartment upstairs. Initially, police believe it is suicide, but Veronique, the daughter of an alleged war criminal, knew she was in trouble. Caught between the police and criminals, Sofia must try to survive.

Review:
Having found herself at a loose end following the latest season of GoT (sorry, spoilers), rather than wait to for a good meaty role to come her way, Natalie Dormer has been very proactive.

Producing a film to star in that passes the Bechdel test plus writing herself a seriously, juicy role in Sofia.
The film, directed and co-written by Dormer's fiancee Anthony Byrne, begins very strongly with an homage to DePalma's Blow Out and introduces the audience to Sofia as a pianist who works on movie scores.
The following journey home to her flat in London features some fantastic use of sound design and mixing which highlights the importance of this sense to Sofia's ability to manage and survive day to day life.
One night she hears her upstairs neighbour in a struggle before falling to her death which leads Sofia into a deadly mystery.
The start of the movie indicates the film might be something akin to Rear Window or Wait Until Dark.
Instead it turns into a cross between a Eighties/Nineties erotic thriller and Eastern Promises.
Dormer delivers a committed and intense performance, convincing as a person who has suffered from blindness all her life.
The film is slickly edited and the cinematography elevates the action as it becomes increasingly ridiculous through a variety of twists that like the main character, you might not see coming.
In the kingdom of the blind movies, Natalie Dormer is Queen.

In Darkness screens at the Edinburgh International Film Festival on Tuesday 26th June, 6.00 and Thursday 28th June, 8.35. To book tickets, click here.
The film is on general release in the UK from Friday 6th July.

Listen to The Nerd Party interview Anthony Byrne and Natalie Dormer on the Filibuster podcast here.
Posted by Dallas King at 12:45