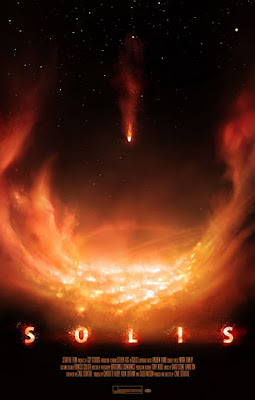 Solis opens with a escape pod hurtling through space towards the sun. The sole inhabitant Troy Holloway (Steven Ogg) must find away to stay alive long enough for another spaceship to come rescue him. Trying to keep him calm and focused over the comms is that ship’s commander (Alice Lowe).
What follows is a low-budget but effective thrill ride set in real time that is a blend of Gravity meets A Matter Of Life And Death.
With a film set entirely in one location, there is literally nowhere to hide. Not for the main character or writer-director Carl Strathie.
Although working with a small budget, Strathie has made every penny count. Building a claustrophobic set but simultaneously using camera work and lighting to disguise any potential shortcomings. The special effects are also impressive for the scenes outside of the capsule and when Troy is floating in zero gravity.
Speaking of Troy, a film where there is only one character on screen for the entire run time can live or die on its lead actor. Steven Ogg (best known for voicing Trevor Phillips in Grand Theft Auto V and a role on The Walking Dead) gives a fairly captivating performance, holding the audience's attention for the duration of his predicament.

He shares decent chemistry with the only other two characters he interacts with; Alice Lowe's Roberts (appearing only as a voice over the communication relay) who is Troy's only constant in a world spinning out of control. And that is down to Murphy. As in Murphy's Law of "anything that can go wrong will go wrong", with Troy facing more obstacles than the crews of Apollo 13 and The Martian combined.
While the film holds the audience's attention for its brief run time, the main obstacle is the script. Another couple of orbits around the script to sharpen up the dialogue could have elevated it to something truly special within the genre.
As it is, Solis can take solace in the fact it should find a home and audience on Netflix or streaming services and act as a calling card for Strathie who we should expect to have a very bright future.